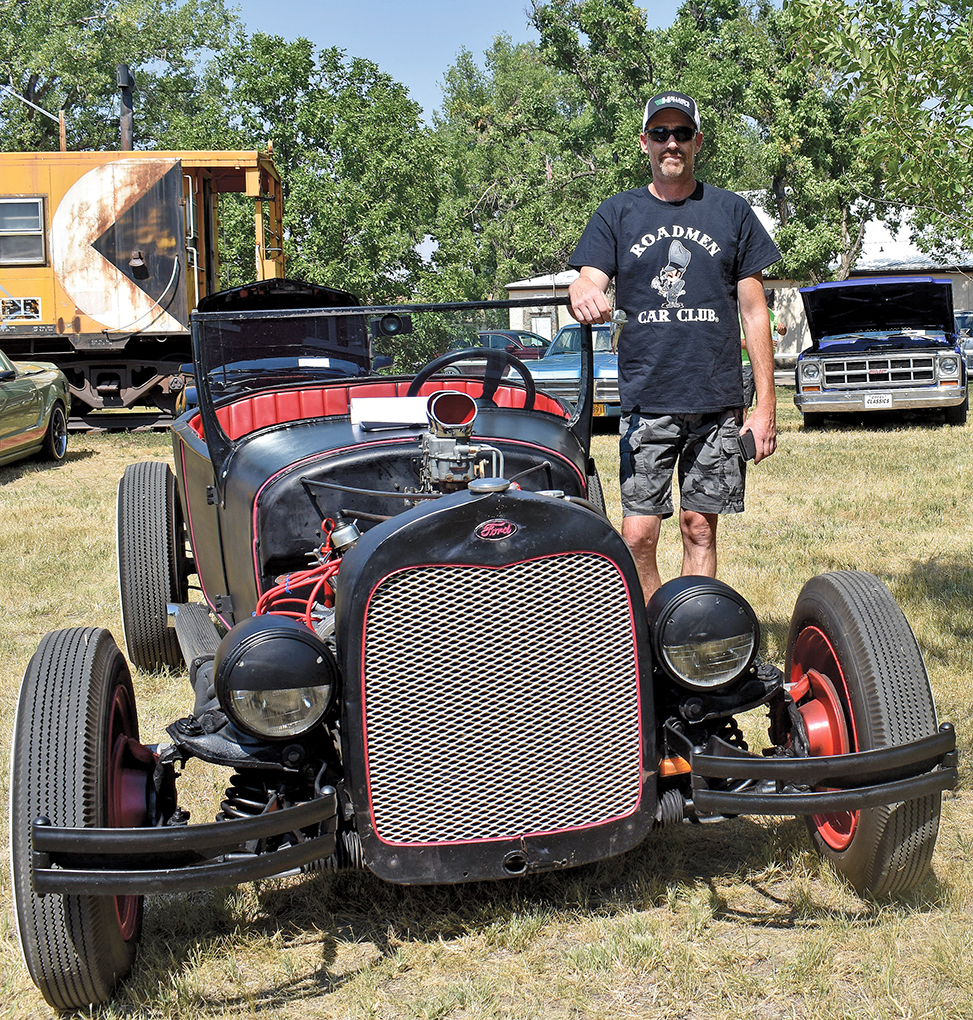 Danny Hirsch, from Burstall, with his 1926 Ford T Roadster. 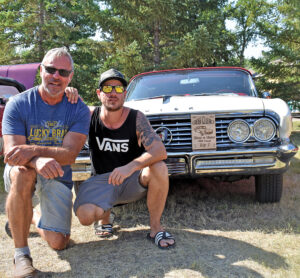 When COVID-19 struck, Danny Hirsch suddenly found himself with a lot of time on his hands.
Unable to ply his trade as a scaffolder, he faced a choice: sit around the house all day watching TV … or work on the classic car he bought in March, 2015.
He chose the latter, devoting many hours each week to giving the 1926 Ford T Roadster an overhaul.
It was a huge job, which kept him occupied for about 18 months. One of the biggest challenges was finding parts; the headlights, for instance, came from a combine.
The results were there to be admired at Saturday’s Creek Classics Show ‘N’ Shine in the grounds of the Jasper Cultural & Historical Centre. It was the 20th edition of the event, which drew a big crowd.
Danny’s black roadster, with a red interior, was one of the oldest vehicles on view, if not the oldest, boasting its special feature: a 347 stroker.
“This is my COVID build,” said Danny, who lives in Burstall, when approached by the News-Times.
It may be an antique, but the Ford T drives pretty well, says Danny, even on the highway.
What is the appeal of classic cars like the Ford T?
“It’s unique,” said Danny, who was sporting a black “Roadmen Car Club” T-shirt. “It’s easy to work on, but it’s really hard to find parts.”
This was Danny’s first time in Maple Creek as an exhibitor, although he did take part in a Kindersley show and shine earlier this summer.
Orville Fischer is no stranger to Maple Creek shows.
In July 1972, as a 21-year-old, Orville saw a verduro green metallic car sitting in a lot. It was for sale and his heart jumped.
There was something about the 1968 Pontiac Grande Parisienne that captivated him. The colour, the look, everything about it convinced him – and eventually his dad – that he had to buy it, even if the price was a little steep for such a young man.
It turned out to be a good decision.
Over the years, Orville has kept the car in good condition. Two special features are its 396-4BBL engine, and trans turbo 400.
According to a board placed in front of Orville’s car, the production date of the Pontiac Grande Parisienne was October 27, 1967, the production plant was in Oshawa, Ontario, and 1,312 were produced in Canada.
A full restoration of Orville’s Pontiac was completed in July 2012.
Orville’s love for classic models led him to co-founding the Creek Classics group with other enthusiasts like Rick Anton.
One of those enthusiasts was Garry Packard, whose 1998 Mustang GT attracted plenty of admirers.
He acquired the car 17 years ago on his 49th birthday – a gift from his wife Marlene. Another of the couple’s classic models, a Fargo Rat Rod, was also on display.
For the Creek Classics Auto Club, Saturday saw a welcome return of the popular show after last year’s event was cancelled because of COVID-19.
Under a broiling sun, with temperatures hovering in the mid-to-high 30s, many people came out to take a look. If conditions became too hot they could buy a cool drink from a food booth manned by Jasper Centre volunteers .
Spread out around the Jasper Centre grounds were 73 vehicles glinting in the sunshine, with registrations coming from such places as Medicine Hat, Eston, Eatonia, Burstall, Gull Lake, Hilda and Brooks.
Among the eye-catching sights were a bright yellow 1929 Ford Model A, 1930 Ford Model A, a 1928 Transam Pontiac with the original paint, a 1967 Dodge Coronet 500, a 1970 VW “Manx” 1600cc dune buggy, and a 1942 Ford fire truck that was pulled out of service in Maple Creek more than 30 years ago.
In the mid-afternoon, Creeks Classics organizers toured the grounds, inspecting the vehicles, picking out three best-in-show winners.
“Among the things we look at are workmanship, how good the vehicle looks, and whether it is a rarity or not,” said Wayne Burton.
During the awards ceremony, three names were called: Rod Haslbeck, from Medicine Hat (1961 Buick LeSabre); Lloyd Klassen, from Gull Lake (1966 Ford Mustang); and Steve Telben (1962 Pontiac Laurentian).
Haslbeck and Klassen were there to receive plaques. Telben had already left by the time the winners were announced.
The day wasn’t just about classic cars. Many people visited the Jasper Centre to enjoy the Western Field Portrait Gallery exhibition in the Heritage Gallery, where there was also a book sale covering every conceivable subject, from religion, pets, science, animals and natural history, to home improvement, travel, and American history and politics.
Dr Jean McKendry, former Chinook Regional Library director, who is overseeing the sale, recommended people come out to peruse.
The book sale will be a feature of the “Celebrate with Maple Creek” festival on Saturday, August 21, when there will also be a “mystery” paper bag book sale at the library.