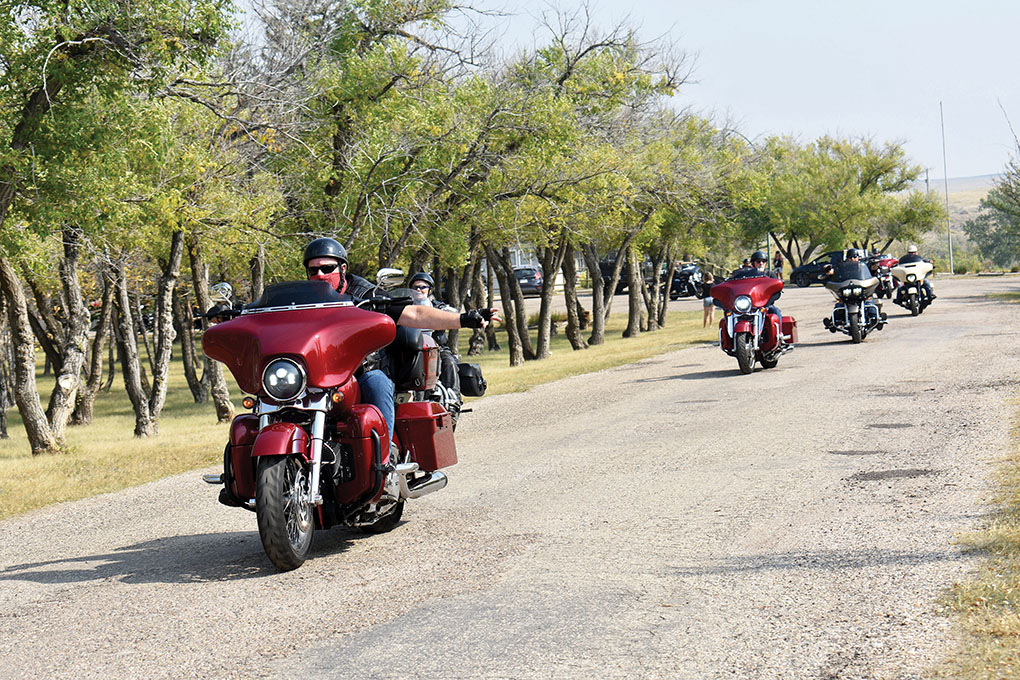 Harley-Davidsons were a popular bike in Maple Creek on Saturday, sparkling under the sun as they filled a section of 1st Avenue near the Jasper Hotel. There were also a few Hondas and a Kawasaki or two.
Impressive as these machines were, however, they were outshone by two bicycles, belonging to sisters far removed from the stereotypical image of leather-jacketed bikers.
Six-year-old Aradene and sister, Layna, 3, were the undoubted stars of the $1-a-vote “show and shine” at the third annual Maple Creek Toy Run.
Aradene won first prize, while Layna came second, after they raised totals of $69 and $68; each received a trophy. Paul Johnston, from Medicine Hat, whose yellow Kawasaki was hard to miss, took third place.
To Bill DeRepentigny, better known as Wild Bill, the sight of Layna clutching her trophy tugged at the heart-strings.
Little over two years ago, his niece was in Alberta Children’s Hospital in Calgary fighting for life after an enormous tumour was discovered in her chest.
At one point she was given four hours to live, before surgery and a new form of chemotherapy, allied to a resilience that astonished doctors, helped pull her through the ordeal.
How things have changed. At the weekend, Layna ran around like any other child; she played with her sister, and happily posed for photographs with her prize.
“I am so proud of her,” said Wild Bill, the main organizer of the toy run.
All the funds from Saturday’s event went to The Salvation Army.
Speaking as bikes began to disperse in the early afternoon, Wild Bill said the final sum was still being calculated; a provisional figure of $753 would be swelled by proceeds from a pancake breakfast in Irvine.
On top of the money were the donations of Christmas toys that bikers brought with them. A healthy pile of gifts should guarantee a festive Christmas season for children in the area.
Wild Bill thanked the bikers who took part at relatively short notice.
About two weeks ago, he wasn’t even sure whether the toy ride would take place this year. Major Ed Dean from The Salvation Army, however, was adamant that the show must go on.
“He told me that after all the hard times that the community has been through, we needed to make this happen,” Wild Bill said. “So, we went ahead without much advertising. I think we had a pretty good turnout, all things considered.”
Major Ed was equally thankful for the level of participation.  Later, The Salvation Army posted a thank you notice on its Facebook page.
As is traditional, the morning saw riders from the west meet at the Irvine Hotel, while those from the east congregated in Gull Lake. They then gathered in the warm sunshine at East Valley Campground, five kilometres west of Maple Creek junction. There was a sizable contingent from Maple Creek, as well as Medicine Hat and Swift Current.
More than 40 bikes were counted at the campground, the majority of them Harleys. Bucking the trend was Lance Sawatsky, from Swift Current, who rode a 1989 Honda Gold Wing Aspencade.
“I’ve been a Honda rider all my life,” he said, although his first bike was actually a 1953 BSA, acquired in 1961.
Sawatsky is part of a group unofficially called the “Tuesday Night Riders”. It was his first time on the Maple Creek toy run.
“I’ve brought two toys,” he said. “I think it’s a great cause, giving gifts for Christmas.”
What is it about riding a motorcycle that so appeals?
“Freedom,” he said, expressing a sentiment shared by other riders.
“There’s nothing like ripping around on a bike,” agreed Wild Bill, who has four Harleys.
Father Dick Kennedy, who arrived as Santa Claus, likens the joy of riding his Kawasaki to floating on a “magic carpet”, leaving the world and all its troubles behind. It is something he can do between April and September, weather permitting.  Many in Maple Creek will associate him with the Anglican Church, so it is perhaps unsurprising that he refers to himself as “Preacher” when in bike-riding mode.
Less predictable is the nickname for his bike: T’Pol, the fictional character in the Star Trek franchise. Portrayed by Jolene Blalock in Star Trek: Enterprise, she is a Vulcan who serves as the science officer aboard the starship Enterprise.
There is a good reason for the name: Father Dick’s Kawasaki is a Vulcan model.
Shortly after arriving in 1st Avenue, Father Dick shed his bulky Santa Claus outfit. Being wrapped up head to foot had been appropriate for the occasion, but not the sunshine. He reappeared later in more traditional biker’s gear.
For more than an hour, 48 bikes were parked in gleaming rows in the section between Jasper Street and Harder Avenue, which had been closed off.
As music blared through speakers, riders mixed with members of the public drawn to the most happening place in town.
Many took advantage of a Salvation Army stand, where hamburgers, cheese, buns and drinks were served.
Anyone with $1 was entitled to vote in the show and shine. With Aradene and Layna in contention, however, the first two places were surely taken. How could such an adorable pair not win?
And so it proved.