Maple Creek in the movie spotlight 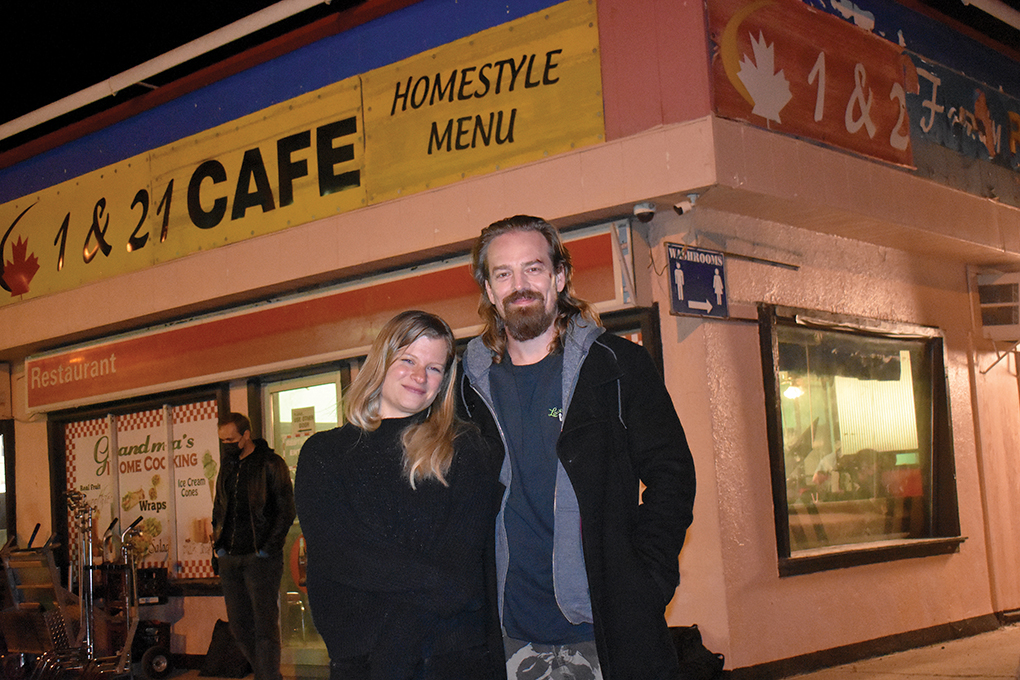 Happy to be here: Fanny Drew, co-producer for Colonelle Films, with lead actor, Maxime La Flaguais, outside the 1 & 21 cafe.

For most passing motorists, 1 & 21 cafe by the Maple Creek junction probably looks like any other eatery. Somewhere to gas up and grab a snack; for tired truckers it provides a parking area to rest.
To members of a Quebec film crew stopping by for a coffee, however, it contained a “wow” factor.
There was something appealing about its façade – the blue and pink trim, the dashes of red, and the yellowish sign advertising a “homestyle menu”.
It was what they were looking for … a perfect place for one of the final, and decisive, scenes in their latest movie, “Rodeo”.
Over three days last week, members of Montreal-based Colonelle films were at the diner, shooting the scene that featured the two central characters: Serge, a truck driver played by Maxime Le Flaguais, and his eight-year-old daughter, Lily, played by Lilou Roy-Lanouette.
“Rodeo” is a road movie that will take viewers from Quebec to the Badlands of Alberta.
It tells the story of Serge, who, entangled in a messy custody battle with his ex-wife (played by Whitney Lafleur), flees with Lily, in the hope of participating in a major truck rodeo.
The News-Times went to the diner shortly after 7pm on Friday, during the last hours of filming in Maple Creek.
We spoke to Fanny Drew, Colonelle Films co-producer, and Maxime Le Flaguais; like many people in Quebec, they are bilingual.
Drew said the scene inside 1 & 21 was a “turning point” in the movie.
“It is almost at the end of the film,” she said. “It is where the father realizes he was kind of wrong to take his daughter to this place. He realizes how much he loved her and he has to bring her back to her mom. This is really the point when he decides to go home.”
Le Flaguais said Serge – who likes to party, listens to heavy metal, and is prone to impulsiveness – was well-intentioned.
“I am a good guy, but make bad decisions,” he smiled.
Drew said the loving relationship between father and daughter was evident from the opening of the film.
“The film starts with a big race, like a real event in Quebec. During it you can see that father and daughter are having fun together.
“The mom, the ex-wife, is really upset. When she arrives the next day, she says to her former husband ‘you are never going to see her again’. That’s when he decides to kidnap his own daughter and bring her to the Badlands to the biggest rodeo track in the country. They have a beautiful relationship.”
Drew explained how Le Flaguais got the role of Serge.
Would-be candidates had sent in tapes of themselves performing.
“We asked many people to do one scene. We watched him (Le Flaguais) and said to each other ‘wow, we have found him’.”
The actor was called back twice, once to play a scene with 10-year-old Roy-Lanouette. It was clear that there was a chemistry between the two.
“He looked right,” said Drew.
Le Flaguais, from Quebec, has had several great parts on television and on stage, and shared top billing with his father, Michel Côté, in the film, Piché: entre ciel et terre [2010), but this is the first time he has played the lead.
It has taken him 18 years to reach this stage, so he is understandably proud of his perseverance. And grateful for the opportunity.
“At last, I do the main character,” he laughed.
How did Maple Creek become part of the production?
Drew said the director, Jöelle Desjardins Paquette, was part of a location scouting team a few months ago.
“They just passed by here,” said Drew. They wanted a coffee and stopped and thought ‘wow, this place looks so amazing’. It was the pink paint, the colours, and the beautiful landscape around here. You really see nothing.
“So they wanted to shoot here absolutely. It was really nice. We managed to contact the owner, who was living in Vancouver. It was complicated getting in touch with him, but we finally did so.”
The film, said Drew, had been a potential project in the works for many years. The planned 34-day shoot began on August 15.
Part of it took place in a real mastodon rodeo in Baie-du-Febvre.
A day was also spent in the Saskatchewan village of Neville, which has a population of about 80 and is within the Rural Municipality of Whiska Cree N.o 106.
Drew said the Maple Creek shoot had been very successful. The crew stayed at the Cobble Creek Lodge.
“We are really happy with our shoot in Maple Creek.,” said Drew. “People were welcoming and pleased with our presences, so we had a really beautiful experience here.”