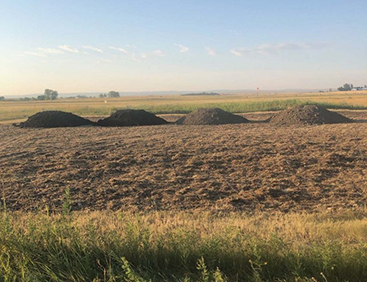 As many as 240 saplings are to be planted next year in Maple Creek’s new tree nursery.
The initial species chosen are Common Caragana, Common Purple Lilac, Tower Poplar, Manitoba Maple, and Green Ash, which are said to thrive in the area’s climate.
The idea is that the growth of new trees will help maintain one of the community’s most attractive features – its canopies.
It is estimated our canopies are losing about 30 trees per year.
Other goals are to enhance community green spaces, providing shade and a natural wind break; short and long-term planting, with specific species planted in an alternating pattern for consistent coverage; and a self-sufficient boulevard tree program.
The nursery is being set up south of the Community Arena, near the Kinsmen Diamond and the Rotary Diamond.
At its November 22 meeting, Maple Creek Town Council approved a proposal to plant and grow sapling trees at the nursery.
In a report, Savannah Mass, The Town’s communications and tourism manager, outlined the background to the project.
She said that in April 2022 she applied to the Saskatchewan Parks and Recreation Association (SPRA) for an “All Action Grant” for setting up a tree nursery and irrigation system to grow saplings for use within the town’s borders.
“We are at the point in the project in which we must order the saplings that will be planted in spring 2023,” she wrote.
Mass said the list of proposed tree species was compiled after consultation with Andrew Excelby, consultant for Parks and Open Spaces with SPRA; Nola Sanderson, chairperson of the Communities in Bloom Steering Committee; and Kelly Keslick, seasonal Parks & Recreation Leadperson.
“The proposed tree plan outlines priority areas within the Town of Maple Creek and identifies tree species that thrive in our zone and climate conditions.”
Three priority tree planting sites have been picked. They are:

Priority One: Skateboard Park
• Tower Poplar: A fast growing, tall columnar tree with a life expectancy of 15 years. It produces no fluff, requires minimal maintenance and no pruning. It can tolerate drought and thrives in poor soils. Tow Paper is most commonly planted in shelterbelts or to line driveways and property lines as a privacy hedge;

• Manitoba Maple: A fast-growing tree, colourful in the fall, that has a life expectancy of 30-plus years. These trees are typically grown as feature or shade trees on larger properties and acreages. Manitoba Maples are cold hard and tolerant of a wide range of soil moisture conditions;

• Trees are arranged in an alternating pattern for short and long-term growth, which ensures consistent canopy and shade.

“The above cycle will ensure a minimum of 30 trees will be distributed throughout the Town of Maple Creek annually,” said Mass. “This number can fluctuate based on the maturity of trees in the nursery.

“Our canopy is currently losing approximately 30 trees per year. This cycle will ensure the canopy is maintained and new, young trees are introduced annually, which promotes staggered growth for long-term sustainability.

“Additional priority planting areas can be determined annually on an as-needed basis. Saplings intended for use in the boulevard tree program will be ready for distribution beginning in 2025.”
Councillor Jill Roy praised Mass for work she had done on the project.
Councillor Betty Abbott questioned whether the species grouping involving Maple Trees provided enough height.
“Maple Trees don’t grow very high,” she said.
Poplars, on the other hand, provided shade.
Mass said the species mentioned in her report were only part of an initial order to get the nursery going. New species could be introduced later.
Councillor Tina Cresswell said that on land ravaged by fire the first trees to grow back were poplar trees.
She wondered whether any thought had been given to putting trees in large pots for downtown and then transplanting them in the fall because trees are often planted in the fall for spring growth.
Mass said a downtown program was a personal dream and something she had thought about for a long time.
“I definitely want trees downtown in large pots,” she said.
It was a long-term goal, she added, that she would like to be part of the nursery program.