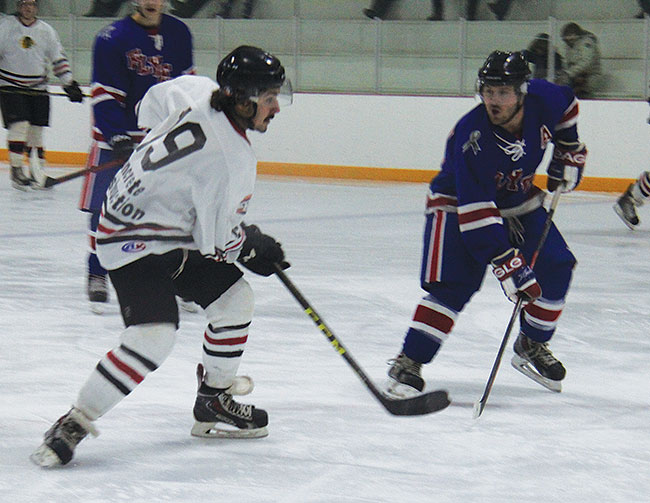 Maple Creek Hawk Cody Florkowski takes control of the puck in the third period against the Flyers in Dec. 10's game at the Maple Creek Arena. SPORTS PHOTO MEGAN ROTH

The Senior Hawks looked like a completely different team, coming out of a bye-week for a home game Dec. 10.

Playing against the Frontier Flyers, the Hawks won by two goals, 7-5.

It wasn’t obvious the entire game that the Hawks would win. Right up to the final minutes, the game could have gone either way.

The Hawks started the game by taking the first goal.

At 12:50 Nathyn Mortlock connected with the puck off a feed from Rob Parkinson and Garret Stokke.

The Flyers got a shot in at 9:02 against Hawks goaltender Chad Bachmeier.

The Hawks kept the Flyers locked out for most of the period.

The final goal in the first period was scored by Ergig Onerheim with the Flyers with a mere nine seconds left in the period.

Going into the second, the Hawks were down by one at 2-1.

The Hawks immediately took control of the puck in the second frame.

Less than a minute into the period, Derek Behrman scored for the Hawks off a feed from Blake Sanderson.

The Flyers rebounded just four minutes later with a successful shot on net.

At this point the Senior Hawks went into high gear, scoring three more times in the middle period.

Mortlock, Dayton Reinboldt and Clint Bertram all had their shots find their target.

The Flyers scored once more in second period leaving the score at 5-4 for the Senior Hawks.

The Flyers rebounded in the third period, scoring and tying the score at five apiece.

For most of the final period it was looking like the game was going to go into over time, as the score stayed tied until late in the period.

It wasn’t until 4:29 when the score changed as Mathew Roy scored with assists from Casey Bertram and Cody Florkowski.

Eager to tie up the score once again, the Flyers pulled their goaltender, Thomas Skelton, with just over a minute left in the game.

The risky move left the net unattended as Lane Sanderson made a long shot at net off a feed from Reinboldt with only 38 seconds left in the game.

The Senior Hawks picked up their first victory at home over the Flyers, 7-5.

The Senior Hawks play the Flyers Dec. 16 in Frontier, followed by a home game on Dec. 17, once again versus the Flyers.