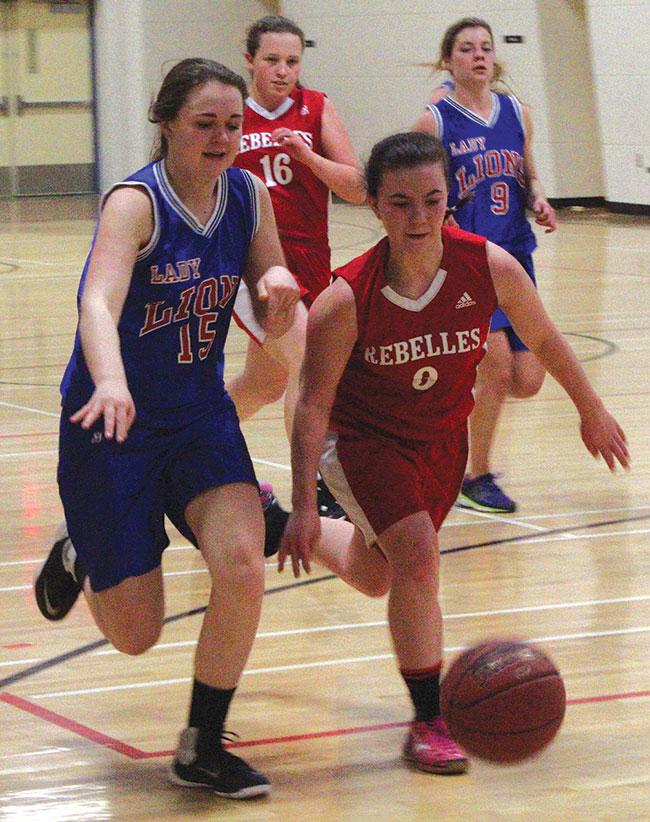 Rebelles player Morgan Reznechenko and a member of the Gull Lake Lady Lions chase down a loose ball in the first quarter of their Dec. 14 game. SPORTS PHOTO SEAN MCINTOSH

It was a huge home debut for senior basketball this season.

The girls won the early game against the Gull Lake Lady Lions 43-20, then the boys’ team dominated with a 100-42 win over the Frontier Raiders.

The girls played first, in a game that was close after the first quarter, with the Rebelles leading 9-6.

Maple Creek then turned up the pressure defensively, forcing many turnovers from the Lions.

“The harder we press the better we are,” said Rebelles coach Joann Haughian. “When we back off sometimes and get a little complacent, I got to really get on them.”

The third quarter was more of the same, with Gull Luke unable to create much offense against the Rebelles’ stingy defence. This is a great way to play early in the season, Haughian said.

“Two of our centres this year haven’t played for a year, so it’s all about rebuilding and regaining that confidence,” said Haughian.

The game wrapped up with Maple Creek winning 43-20. If the Rebelles keep playing that way they will be successful, said Haughian.

“I felt that we played as a whole team out there,” she said. “Nobody was hogging the ball and on defence they were talking and helping each other.”

Faith Rutherdale led the way for the Rebelles with eight points.

Minutes after the girls’ game wrapped up the senior boys’ team hit the court to take on Frontier. The Rebels got off to a hot start, leading 30-11 after the first.

The offensive pressure continued through the second, with Arthur Fritzke scoring six of his game-high 24 points in the quarter.

The bench got the majority of playing time after the half, but the Rebels just kept scoring. The team hit triple-digits in the last minute, eventually winning 100-42.

Despite the wide margin, coach Shawn Buss said the team has work to do.

“I wasn’t impressed with the way we played. I know we got 100 points, but it was street ball. It was ‘we could take a guy one-on-one and score’ and that’s what we did,” said Buss.

Next time out, the Rebels will need to come together and follow the game plan, Buss added.

“The team needs to stick with the system and run whatever offence we have in play,” he said. “If we can’t run our offence in a game like this, what’s going to happen when we come against the stronger teams?”

Even though it’s early in the year, the team has set some lofty goals for itself, including finishing top-four in the province, Buss said.

“I think with this team it’s possible,” he said. “We should be a very strong team this year and very fun to watch.”

The boys’ team will be heading to Shaunavon for its next game, which Buss said will be the team’s first big challenge on the season. The Rebelles are preparing to host a tournament in the Maple Creek Composite gym. The tournament begins Dec. 16 and wraps up Dec. 17.