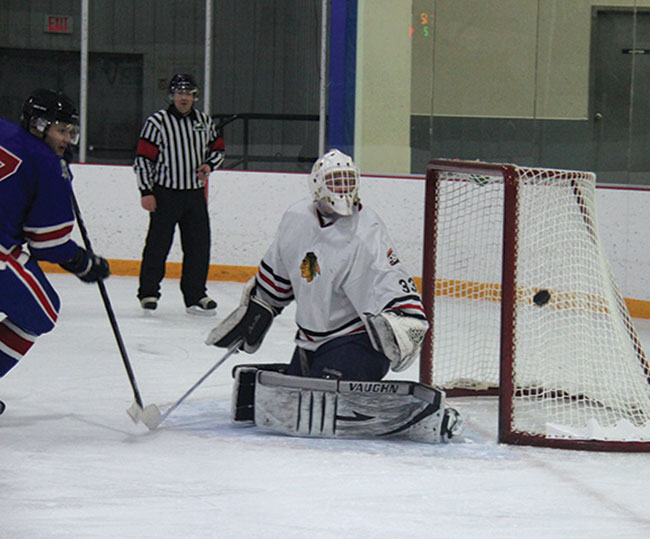 Senior Hawks goaltender Chad Bachmieier deflects a shot from the visiting Frontier Flyers in the first of a three-game series in the playoffs on Feb. 4. The Hawks lost their its game against the Flyers but rebounded for the next game the following night. SPORTS PHOTOS MEGAN ROTH

The Senior Hawks are still alive in the “survival series” with one win and one loss against the Frontier Flyers.

The best-of-three series had the Hawks lose at home in overtime on Feb. 3 but win in Frontier the following day.

Team manager Len Rodin says the team has come together and is playing better together in the second half of the season.

It shows in the playoffs, with the first game of the series taken to overtime.

“We play better when we have two complete lines,” Rodin explained, adding having Jason Roberts back on the team completes the two lines.

While playing in Frontier the team played with three complete lines and Rodin thinks the team will continue playing with three for the rest of the playoffs.

The game Feb. 3 was evenly matched with each shot on net answered back by the visiting team.

Geoff Peet started the game off by putting the Hawks on the board first at 17:36, assisted by Trent Winzer.

The Flyers answered back seconds later with a score on Maple Creek’s net, tended by Chad Bachmeier.

Frontier scored twice more before the halfway mark of the first period, but the Hawks were right there with them.

Nathyn Mortlock answered back with the help of Lane Sanderson and Roberts with 13:43 left on the clock.

Roberts came in for a goal on net with a minute left in the first with assists from Mortlock and Sanderson, leaving the scored tied at three apiece at the end of the first period.

The second period was a little slow moving, with both teams stepping back and not attacking the puck as much as in the previous frame.

There was only one goal and it was from the Flyers, putting the visiting team ahead 4-3.

The Hawks came out in the third frame a more determined team than in the second.

Sanderson put the puck home with assists by Mortlock and Roberts early in the third.

Roberts scored his second of the game with about nine minutes left on the game clock after chipping the puck into the net off a rebound from Mortlock and Garett Stokke.

Mortlock came in with a minute left and tied the game off a feed from Roberts and Stokke.

The game went into overtime with the score tied at six.

The Hawks dominated Flyers territory during the five-on-five overtime and had many shots on net that just couldn’t make it past the Flyers goaltender.

“We should have won that game,” said Rodin. “We were all over them but we just couldn’t get it in.”

The team had a chance they didn’t waste the next night, when they won the second game of the series 6-2.

“Saturday night we had Cody Florkowski to finish out the second line,” Rodin explain when asked the difference between the two games.

“He’s a little spark plug that gets right in there.”

Florkowski had three assists during the game Saturday night in Frontier.

Sanderson had two goals, one in the first and one in the third to finish out the game.

Blake Sanderson and Stokke each scored once to round out the team’s six goals during the game.

The team’s defence also played better keeping the Flyers from scoring until the second period.

The game was full of tension, particularly towards the end of the game.

“Before the end of the 6-2 game, big, tough Jesse Armstrong sticks a knee into our smallest player [Garett Harrigan] and elbows him in the mouth,” Rodin said.

Armstrong received a two-minute penalty for kneeing, but the refs didn’t call the elbow to the face, despite Harrigan having blood run down his face, Rodin said.

Harrigan was taken to the hospital immediately after the game and was diagnosed with a concussion.

According to Rodin, the following faceoff had a puck fired directly into the Hawks bench, missing the coach – Rob Zinger – by inches.

There was no penalty called on the play, Rodin said.

“I hope people get fired up.”

The next game will be Feb. 11 when the Senior Hawks play the final game of the series against the Flyers on home ice.

If the Hawks win they will go on to play the first place Gull Lake Greyhounds in a five-game-series.

“I think we have a very good chance of winning [against Frontier],” Rodin said.