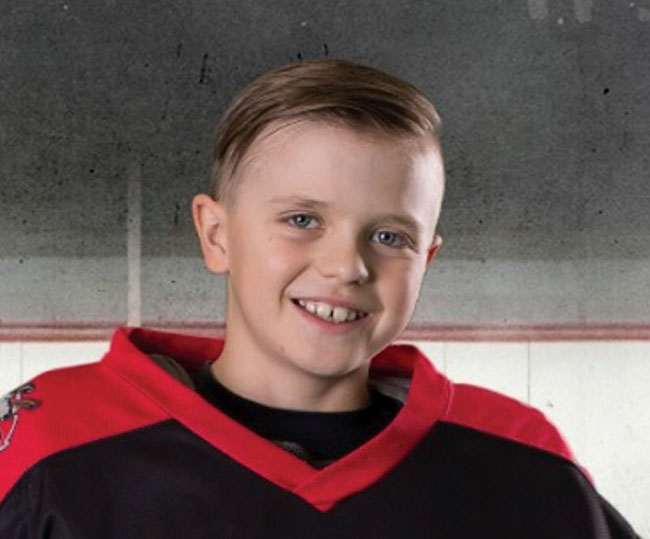 Ten-year-old Gull Lake Greyhounds goaltender Berney Weston raised roughly $10,000 after making 53 saves in a playoff game against Eastend. The money raised goes towards the Casey Foundation, which assists children with autism. He chose to raise money because his friend Chayce Foster has autism. SUBMITTED PHOTO

A young goaltender from Gull Lake just played the biggest game of his hockey career, raising nearly $10,000 for a good cause.

Berney Weston, 10, went into Gull Lake’s March 13 playoff game against Eastend with a goal in mind – raising money for the Casey Foundation in Regina which assists children with autism.

He wanted to raise money for that particular cause is to help his friend with autism, Chayce Foster, whose family receives funds from the Casey Foundation.

“I wanted to help him grow up and have a better life because he has trouble understanding things sometimes,” said Weston.

Heading into the game, Weston had a number of supporters who had pledged to donate a certain amount of dollars for every save he made. By the end of the night Weston made 53 saves.

Even after the game, more money has been coming in for Weston, so it’s tough to say exactly how much money they’ve raised for the Casey Foundation.

“I was excited and happy that I could raise so much money for [Chayce],” said Weston.

The idea first came about March 9, when Berney Weston approached his parents, Amanda and Clint Weston, about wanting to raise money for Foster.

“He originally wanted to set up a lemonade stand and we said, ‘Well we live on a farm, bud, and it’s cold,”  Clint Weston said with a laugh.

Berney Weston then came up with the idea to have people donate for every save he made in his upcoming hockey game.

The Westons then met with the Fosters and they were all for moving forward with the fundraiser.

“His mom Rachelle was very emotional,” Clint Weston said. “They were 100 per cent all in right off the bat and so appreciative and thankful. Then to see

Chayce out and at the game, he was happy to get the attention.”

Seeing his son plan something like this was an emotional moment for him as a far, Clint Weston said.

“There’s no words to describe it. It’s even hard to just talk about it, I’m so proud,” he said.

Initially, the Westons didn’t expect to raise too much, with Clint Weston saying he thought maybe they’d get $50, but within 10 minutes of posting the fundraiser details online, they already topped that number.

About 200 people made a pledge for the game, with some people donating as much as $10 for every save made. This says a lot about the community they live in, said Clint Weston.

“The help has been overwhelming,” he said. “It’s emotional for us to see the support this is getting from the community.”

Berney Weston’s Gull Lake Greyhounds unfortunately weren’t able to win the game, losing to Eastend 9-5 and being eliminated from the playoffs as a result, but his family is chalking this one up as a win.

The family celebrated the young man’s birthday the day after the game.