Golf season ready for tee off 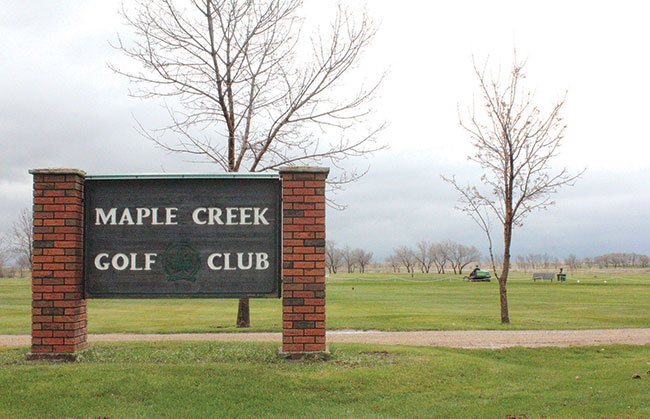 Golfers in the Southwest are breaking out their clubs as the golfing season begins.

The golf course in Maple Creek officially opened April 20, much to the joy of the players in town.

“The maintenance crew has been working since the beginning of April and have done a great job to get the course opened up early,” Maple Creek Golf Club Executive Board President David Moser said via email.

Moser says the course wintered very well, with tee boxes and fairways in good condition. The putting greens still have some growing to do – the weather has slowed that process down, he added.

“Lots of cool days and frosty nights have set things back a little bit.  If we can get a couple weeks of heat and sunshine I think they’ll start to come in nicely.”

The golf course began the year in better financial position than it has in the last few years, according to Moser.

“With that in mind we really want to focus on course improvements,” he said.

Some of those improvements include new front tee boxes on the first and seventh holes, which should be completed soon. Tee boxes for holes three and nine are to be built this spring and hopefully completed by the end of the season.

The board also had soil testing done recently – the results are expected within the next week or two.

There has been a lot of turnover in the executive board over the last couple years, but Moser says that’s not necessarily a bad thing, as new faces means there will be more new ideas.

“We have a good mix of people on the board, everyone chips in and does their part to ensure the course continues to run smoothly.”

Dale Elderkin is in charge of the pro shop, Charlie Johnston leads the maintenance crew and Brenda Martin is the lounge manager.

Maple Creek Librarian Violet Wong will lead Junior Golf this year, which kicks off July 4 and will run Tuesdays at 8 p.m. throughout the summer. Registration forms are at the course and will be sent to schools.

The men’s league began on opening day and will run every Thursday through the season. Meanwhile the ladies’ league is expected to run every Tuesday starting in May.

The Maple Creek Golf Club had 169 members last year, but they are hoping to see that number rise, Moser said.

Last year the club introduced a young-adult membership, where 19 to 25 year-olds received a discounted membership.

This is done “in an attempt to spark more interest from the younger generation as the future of our Golf Club relies on them.”

Last fall the club also introduced a payment plan, where memberships can be paid off over months. There are no additional membership fees or interest with the plan, Moser said.

“It’s a great way to pay memberships off without having to come up with a lump sum payment in the spring.”

For more details you can visit the Maple Creek Golf Club’s website at http://www.maplecreekgolf.com. The club is also on Facebook.