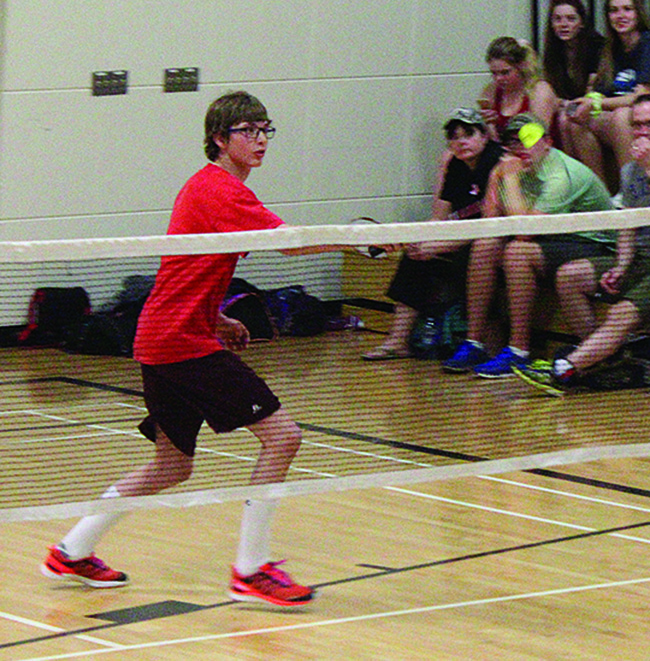 Trevor Brost fires the birdie back over the net during the Junior Badminton District Championships. Brost and his teammate Kaylyn Eremenko finished second in the mixed doubles competition.

After a hard-fought season, a group of junior badminton players from Maple Creek walked with silver medals at the Junior Badminton District Championships.

The year-end tournament was held in Maple Creek May 6 at Maple Creek Composite School and Sidney Street School.

Megan Tumbach and Kerstyn Wenzel from Leader finished first in the girls’ doubles category. The Leader team and the Maple Creek duo were going back-and-forth all season, according to coach Shawn Buss.

“Those teams battled all year long,” Buss said. “I really thought they would play in the finals and whoever was able to play their best game was going to win.”

Bock and Briggs played well in the first of three games in the finals, but as the match went on, they just couldn’t get the edge on the team from Leader.

“Our girls played well, but that other team is excellent. We came a little bit short, but they had a great season,” said Buss.

The Maple Creek pair hasn’t been a team for long, teaming up for the first time at sectionals a couple weeks ago, Buss said.

“Kaylyn and Trevor are really strong players. Kaylyn could’ve played singles and would’ve placed I think, but the two decided to team up.”

There was going to be a second mixed doubles team that Buss says would have made some noise in districts, but due to Janae Wilson breaking her leg just before the tournament, they did not play.

“They would’ve done some damage as well alongside Trevor and Kaylyn.”

The rest of the team had a solid season, Buss said. Tyson Forbes was another player he says played very well. Forbes competed in the boys’ singles category.

“The fact that he made it all the way to districts is huge. He learned a ton and there were some amazing boys’ players this year, so he was in for a tough time.”

Being able to play the tournament at home was something the players were happy about, Buss added.

“It was nice to be able to have it at home. It’s good to have it where you don’t have to travel.”

There wasn’t a significance difference in the Sidney Street and Maple Creek Composite School gyms, but Buss says the lighting is good for badminton.

For a full list of winners from junior and senior districts, flip to Page 17 of Thurs., May 11’s Maple Creek News.