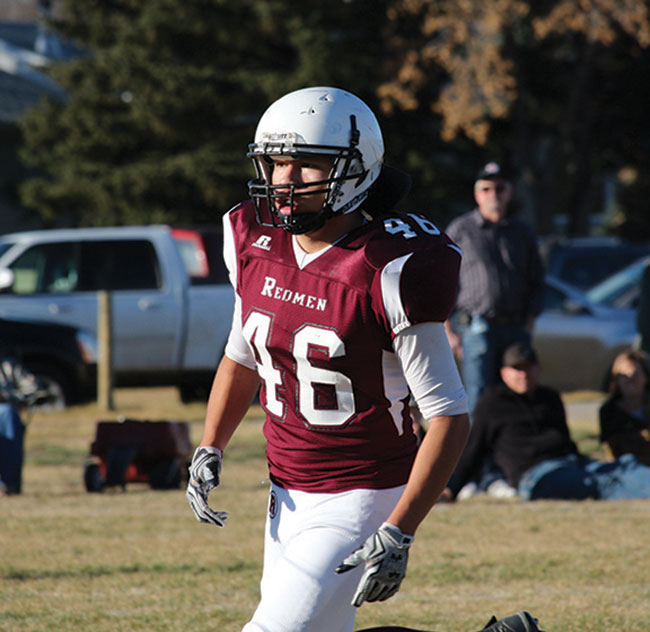 Linebacker Keegan Delorme is one of five Maple Creek Redmen who participated in the 33rd annual Senior Bowl, which took place in Saskatoon May 22. The game was won on the final play with Delorme's team emerging as the victor. "I just started screaming," Delorme said of the exciting finish. PHOTO DOMINIQUE LIBOIRON

You don’t need to know what happened in the third quarter. Forget about the first half. All you need to know is that with five precious seconds remaining in the fourth quarter Team South was losing 15-13.

Five Maple Creek Redmen were on Team South. Hayden Briggs, Evan Chabot, Keegan Delorme, Brett Pridmore and Justice Smith were representing southern Saskatchewan at the Senior Bowl, which was held May 22 in Saskatoon.

Now in its 33rd year, the Senior Bowl is an annual all-star game. Saskatchewan’s best football players in Grade 12 are selected to form two teams, one from the south and another from the north.

Emotions swirled on both teams and among the spectators at SMF Field. Red electronic numbers on the clock warned Team South they had only enough time for one final play.

Pressure mounted as the southern squad lined up on the North’s 35-yard line. Team South’s centre snapped the ball to the quarterback and the clock began to tick ever closer to zero.

With the pigskin in hand, the quarterback scanned the field, but instead of open receivers he saw a tall opponent charging straight for him with the intention of earning a sack and securing victory for Team North. Three seconds remained.

With the fluidity and poise of a gazelle, the quarterback slipped to the right, evaded tackle and while running downfield continued to search for a receiver. There! Near the end zone! Without breaking stride, the quarterback cocked his arm and fired. All eyes followed the ball as it climbed to the peak of its trajectory then arched downward before landing in the outstretched arms of the intended receiver who literally caught the ball on the goal line and scored the winning touchdown. Zero seconds remained.

Briggs, Chabot, Delorme, Pridmore and Smith along with all the other players rushed toward the receiver to congratulate him and to celebrate Team South’s dramatic 19-15 triumph.

“I just started screaming,” Delorme shared as he described the heroic finale. He said the contest was even more adrenaline-charged than this season’s spectacular semi-final when the Redmen stopped the surging Clavet Cougars in the last minutes of the fourth quarter and advanced to the provincial championship.

Chabot said of the Senior Bowl, “It was by far the most intense and closest game I’ve had.” The defensive back added the match went back and forth and it was never clear who’d win.

For Pridmore, who played centre, “It was a hard-fought battle the entire game.”

According to Smith and Briggs, one of the many positives of the experience was playing on the same team as former rivals, as difficult as that was at first.
Throughout high school, the young men had competed against Shaunavon, Gull Lake and Lumsden, whom the Redmen lost to in this year’s provincial final, but now players from all those teams were on the same side.

Smith explained the coaches asked Team South to no longer see each other as enemies, but as brothers.

When it came to his opponents, Smith joked that during the season he wanted to “crack their skulls,” but when he joined forces with them Smith developed a respect for their athletic ability and could see they’d make great teammates.

The team gelled quickly and, ironically, Smith said one negative aspect of the Senior Bowl was how the newly-formed band of brothers didn’t get to spend enough time together following the win. Given the distances to return home, the players had to leave soon after the game.

Briggs, a speedy tailback who also rides bulls, said rivalries had to be put aside for the benefit of the group and he hailed the experience of uniting with adversaries as a way to learn more about football and to absorb the talent of other players.

Chabot was named Team South’s MVP. He played his position well by knocking down a number of passes. Along with Smith and Isaac Peterson of the Shaunavon Shadows, Chabot was tied for the most tackles. He was also on special teams.

Based on their performance during the game, Chabot, Delorme and Pridmore were selected for the upcoming SasKota Bowl, the annual competition that pits the best players from Saskatchewan against the best from North Dakota. The rest of the province’s SasKota Bowl line-up was picked from Team South and Team North.

Delorme was ecstatic to learn he earned a spot of the roster. He described the sensation as “one of the best feelings ever.”

The SasKota Bowl will be held July 4 in Cando, N.D.