The Redmen ended the 2017 season at home Oct. 13 with a 33-0 shutout of the Fort Qu’Appelle Bisons.
Reed Reisdorf led the team in scoring with three touchdowns. Tyson Forbes added two touchdowns of his own and Peter Rutherdale kicked three converts.
Reisdorf is one of the team’s captains and he commented on the season. He said the six-game schedule began with a win over Shaunavon and this gave the Redmen a positive outlook for the season ahead. However, the following games resulted in losses and this was taxing, Reisdorf expressed.
One of the challenges the Redmen faced was playing two games against the Lumsden Devils, a team Reisdorf described as one of the best nine-man squads in all of Saskatchewan. Lumsden beat Maple Creek in both contests. The combined score was 136-0.
Both losses and other difficult matches prompted some players to quit the team, Reisdorf said, but those who remained showed their commitment and this drew the group together.
Reisdorf views the losses against Lumsden in a favourable light. He said the games were a chance to play against one of the best teams around and the experience showed members of the Redmen what level of athletic ability they can strive to attain.
He summarized by saying 2017 was the most trying of his three seasons of high school football, but was nonetheless very enjoyable.
Looking back on the season, head coach Dale Udal said it meant a lot to the Grade 12 students to end their high school football career with a win and the fond memories that go with it.
Coach Udal said the season began and ended with wins, but there were some low points in between. Maple Creek finished the season 2-4 with four losses in a row. Nevertheless, Udal said high school sports aren’t just about having a winning record — they’re also about character development.
“Football is a good teaching tool for young men,” Udal expressed. He said the sport teaches teenagers many important values such as teamwork, patience, commitment and hard work.
This year’s team was a good group of boys, Udal stated. He said the Redmen are only losing five Grade 12 students so there’s a good core group of Grade 10 and Grade 11 players for next season. The five graduating players are Reisdorf, Wyatt Martin, Staecen Udal, Lane Friday and Steven Schneider of Fox Valley.
Following the game, assistant coach Brent Mason posted a Facebook video announcing he’s stepping away from the Redmen. Throughout the season, his videos generated many views on the social media platform.
When asked why he decided to withdraw from coaching football, Mason said, “It wasn’t fun anymore.” Mason added he’s in no means tired of football, but he could feel his enthusiasm for practices and road trips fade. He decided to step away before he started to dread coaching the sport.
Mason has been involved with the Redmen for more than 30 years. The former assistant coach said football has been very good to him and he wanted to leave on a positive note rather than a negative note. He said it was time for him to step back and make way for younger coaches.
Mason will continue to root for the team and attend games. “I’ll still be haunting the sidelines and making those goofy videos,” he shared. 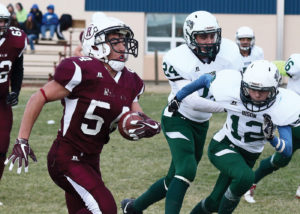 NEWS PHOTO DOMINIQUE LIBOIRON
Maple Creek’s Reed Reisdorf charges toward the end-zone during the Oct. 13 game against the Fort Qu’Appelle Bisons. Reisdorf led the team in scoring with three touchdowns and helped the Redmen secure a 33-0 win at home during the last game of the season.