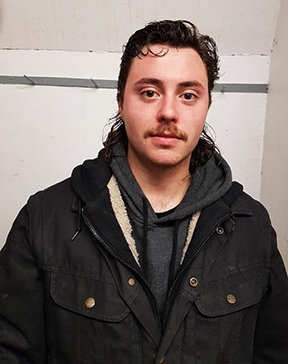 Kasper Vockeroth was solid in net for the Maple Creek Sr. Hawks.

The Maple Creek Sr. Hawks were scheduled for two games this past weekend and were hoping to build on their first win of the season against Cabri. However, Mother Nature had other plans on Friday evening as the tilt against the visiting Gull Lake Greyhounds was postponed due to the poor driving conditions on the Trans Canada.

The Hawks travelled to Frontier on Saturday night to battle the Flyers. Frontier jumped to an early lead thanks to a couple of goals by Clayton Wenaas and another by Jayden Balfour. The Hawks would not be deterred however, even with their rookie goaltender between the pipes. Kasper Vockeroth was playing in his first ever senior hockey game after starting goalie Wade Waters was under-the-weather.

The Hawks got on the scoreboard at the 14:57 mark of the second period with a goal by Nathyn Mortlock. Troy Rapuano and Garret Stokke were credited with the assists.

The third period was kind to the visitors as they tied it before the final frame ended with Adam Antkowiak and Rapuano scoring.

Rapuano has been on fire to start the season. His tying goal was unassisted.

Hawks manager, Len Rodin praised both Rapuano and Vockeroth on their play.

“Vockeroth kept us in the game. We told the boys that we needed to win it for him.”

And that’s exactly what they did. Antkowiak scored his second of the night at 2:27 of OT for the victory.

The “comeback kids” will host the Shaunavon Badgers on Saturday night with an 8:00 PM puck drop.