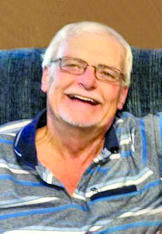 WIEBE – Glenn Douglas Wiebe passed away with his loving family by his side, on Tuesday, February 10, 2015 at the age of 64 years, at the Carmel Hospice(St Joseph’s Home), in Medicine Hat, Alta. beloved husband of Coralie. He also leaves to cherish his memory his children, April (Craig), Amber (Darrin) and Todd (Jessica); four grandchildren, Paige, Chase, Sydney  and Milo; two brothers, Keith (Judy), Ward (Kalyna); six sisters, Rona (Lorne), Diane (Eugene), Elaine (Dale), Donna (Steve), Gayle (Kevin) and Shelly as well as numerous nieces and nephews. He is predeceased by his parents, Twyla and Roallen and his brother, Kenny.
The funeral service was held in St. Mary’s Anglican Church on Tuesday, February 17, 2015 with Rev. Peter Boote officiating. Funeral arrangements were entrusted to Pattison Funeral Home in Medicine Hat, Alta.
Glenn was born in Vancouver, B.C., on September 22, 1950. He later moved with his family to Cudworth, Sask. in his teenage years. After school he enlisted in the Royal Canadian Air Force for nine years. While stationed in Moose Jaw he met Coralie and they were married in 1973. Once he left the Armed Forces he worked for the Credit Union system for 16 years and finally settled in Maple Creek, Saskatchewan in 1988. After leaving the Credit Union, Glenn and Coralie purchased the Cypress Hills General Store and Gas Bar and ran it until they retired. During retirement they split their time between Maple Creek, the community they loved, and the warm Arizona climate in the winter.
Glenn began his battle with cancer 10 years ago and even though the battle was hard he remained jovial and positive right till the end. He never lost hope and was always smiling saying that he was having the “best day ever.” He felt that life was a celebration and a gift bestowed on him by God. He was happy to be alive and enjoyed his time with his family which he cherished so much, especially his grandchildren. He lived vicariously through them. His family was everything to him and he would always tell his children how proud he was of them and how much he loved them.
Glenn always enjoyed his many visits with friends and family or anyone who he met along the way. His smile was infectious and he had a way of being positive all the time. This positive energy would always rub off on anyone he came in contact with.
Anyone that knew Glenn knew he was a collector and always tried to negotiate the best deal possible. He also saw the best in people, even when they did not see it in themselves. He often would help out individuals in a time of need with no expectation of recognition. He was a caring, loving and respectful man. He was a mentor for many individuals in the community and his belief in God was something he held onto until the end.
We watched you suffer, we watched you sigh, but all we could do was just stand by. When the time came, we suffered too, for you never deserved what you went through. God took your hand and we had to part. He eased your pain, but he broke our hearts.
If you could have spoken, before you died, these are the words you would have replied,
“This life for me, has truly passed. I have loved you all ’til the very last. Weep not for me, but courage take, and love one another, for my sake.”
Those who wish to remember Glenn can do so with a donation to either: St. Mary’s Anglican Church, 302 Jasper Street, Maple Creek, Sask., S0N 1N0 or Carmel Hospice (St. Joseph’s Home) c/o 156 3rd Street NE, Medicine Hat, Alta.