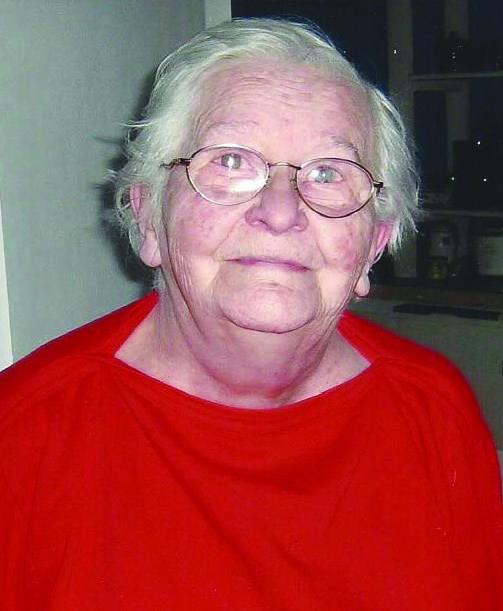 GRAY – Nellie Orma Mee was born in Maple Creek Hospital January 7, 1927 at 7 a.m., the second of two daughters to Billie and Annie Mee. Her father had wanted a son, but in a few years would have the best and cheapest hired help he would ever have. Before she started seventh grade she was told she wouldn’t be continuing school as her eyesight wasn’t good enough. She started working the farm as a chore boy, before advancing to hired help for the next six years. Nellie and her family then moved to town and she got a job.
In 1948, Nellie married Terry Kimber. They lost their first son Kenneth, and then had Edwin and Norman. They were married for eight years when Terry passed away. Nellie then married Bill Gray and had two more sons, Gordon and Donald. Sixteen years later, Bill passed away. Nellie then took over the operation of the farm until giving up the reins to Edwin.
Nellie was a member of the Rebekah Lodge for 60 years and the Royal Canadian Legion  Auxiliary for 52 years, both of which have now disbanded. She also belonged to St. Mary’s Anglican Church for 60 years. She was involved in 4-H, many years as a member, parent and leader and continued to donate to the regional fair every year. She was also a lifetime member of the Oldtimer’s Museum Association as well as serving on the C0-op board.
Nellie is survived by her sister Betty in Salmon Arm, B.C.; her four sons Edwin (Georgina) and Norman in Maple Creek, Gordon in Berea, Kentucky and Donald in Medicine Hat. Her granddaughter Genene married Rob Zinger and they have two boys Bodhi and Trysten. They have now taken over the family ranch. Her granddaughter Norma lives in Calgary, Alta. working for EECOL Electric.
Nellie passed away at the Prairie View Health Centre in Mankota, Sask. on April 26, 2015.
The funeral service was held at St. Mary’s Anglican Church in Maple Creek, Sask. on Fri., May 1, 2015 at 2 p.m. with Reverend Eleanor Rockabar officiating. David Hooper was the organist. Interment took place at the Maple Creek Cemetery. Pallbearers were Clay Yarshenko, Ron Plummer, Donny White, Walter Arnold, Alf Wakelam, Ed Bath. Honorary pallbearers were all those who shared in Nellie’s life.
Those who wish to may remember Nellie with a donation to St. Mary’s Anglican Church memorial fund or the Maple Creek Oldtimer’s Museum.