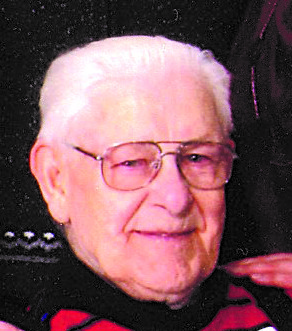 STAPLES – 1925 ~  2015
In loving memory of our father, grandfather and great-grandfather.
Harvey Victor Staples of Medicine Hat, passed away on Wed., May 27, 2015 at the age of 90 years.
Harvey leaves to cherish his memory his sons, Barrie (Betty) Staples of Medicine Hat and Gordon Staples of Vancouver; three grandchildren, Erin, Diane and Mark; one great-grandchild, Phoenix; three brothers, Roy (Helen), Merle (Cathy), and Don (Marg); one sister, Shirley (Graeme) Cave; one sister-in-law, Una Staples; as well as numerous nieces, nephews and cousins.
Harvey was predeceased by his first wife, Alma; his second wife, Marguerite “Mickey”; three brothers, Ralph (Marlene), Alvin (Vicki) and Jim; one sister, Eleanor (George) Wing; as well as numerous nieces, nephews, aunts, uncles and cousins.
Harvey was born in Moose Jaw and was raised in Prelate and Lemsford. He had fond memories of hosting dances on the upper floor of the big old barn on the homestead. His mother passed away from cancer when Harvey was 18 years old, and the youngest child, Don, was only 11 months old.  He stayed on the homestead for several years to help his father raise the family.  Harvey later left home and worked several jobs including a slaughterhouse, farm hand, road construction, a lumber mill, and a mine.  He took ill and landed in the Maple Creek Hospital where he met his future wife, Alma Jans. He and Alma moved to Blairmore and Pincher Creek where he earned his ticket as a partsman. While there they adopted their two boys, Barrie and Gordon. After spending six months in Maple Creek, the family moved to Medicine Hat.  Harvey worked at Beny Motors for over 12 years as a partsman.  He then worked for Jack Stephanson Pontiac Buick and finally retired from Green’s Motors in Bow Island.
In September 1985, Alma passed away suddenly, just three months from retirement. Two years later, Harvey married Mickey Maurice and did a lot of travelling with her. They also had a winter place in Yuma, Arizona. Mickey passed away in June 2010.
Harvey had a great love for gardening of all sorts.  His flower beds were to be envied.  He also loved fishing and was very involved as a Boy Scout leader for many years. He was a member of St. John’s Ambulance and loved going to Tigers hockey games with Mickey. She taught him the love of golf and also introduced him to the world of art. They both loved painting scenes and belonged to the Medicine Hat Art Club for many years.  Harvey loved his boys and his grandchildren. He was a wonderful grandfather and taught them all about fishing, painting and gardening.  His greatest pride was the birth of his great-granddaughter, Phoenix, in August 2014. He spent an hour playing with her during the last day of his hospital stay.
The graveside service was held at Hillside Cemetery, 10th Avenue and Gershaw Drive SW, Medicine Hat, on Mon. June 1, 2015 at 1:30 p.m. with Gary W. Goran officiating.
Memorial gifts in Harvey’s memory may be made to Medicine Hat & District Health Foundation, Palliative Care Unit, 666 – 5th Street SW, Medicine Hat, Alberta, T1A 4H6.  Condolences may be sent through http://www.saamis.com or to condolences@saamis.com subject heading Harvey Staples.   Funeral arrangements were entrusted to  Saamis Memorial Funeral Chapel and Crematorium, “The Chapel in the Park”, Medicine Hat, Alberta.  Should you wish any additional information, please telephone 1-800-317-2647.