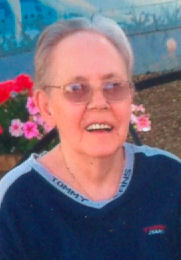 STOJKE – Irene Rose Stojke passed away on Thursday, November 19, 2015, at the age of 70 years, beloved wife of Gus Stojke of Maple Creek.
She also leaves to cherish her memory her children, Kelly (Crystal) Stojke, Albert (Terry) Stojke and Tracy (Shawn) Bauer; nine grandchildren, Jacob and Jackson Stoyke and their mother, Andrea Smith, Ryder Beisel and Rowan Stojke; Tayler, Kasey and Arynne Stojke and Kobey and Riley Bauer; one  brother, Ron (Mildred) Schmaltz; one sister, Marion Gold; brothers-in-law and sisters-in-law, Herb Stojke (Julie Krup), Frieda (Arnold) Freitag and Lydia Traichel as well as numerous nieces and nephews.
She was predeceased by her parents, Frank and Elizabeth Schmaltz.
Irene was born in Leader on May 29, 1945.  She was raised and began school at Wilkie, Sask.  The family later returned to the homestead 15 miles south of Prelate and Irene finished her high school at Liebenthal.  In 1964, Irene moved to Redcliff to work, where she met Gus and  they were married on July 10, 1965 at Liebenthal.  They lived in Medicine Hat where Irene raised her family and worked at a nursing home.  In 1977, they bought what became Gus’s Processing in Maple Creek and she worked alongside her husband until her health forced her to retire.  Irene beat her initial diagnosis and fought cancer for 17 years.  This past July, she and Gus celebrated their 50th wedding anniversary.   A private family gathering will take place at a later date.  To e-mail an expression of sympathy, please direct it to: pattfh@telusplanet.net subject heading: Irene Stojke, or you may visit http://www.pattisonfuneralhome.com  and leave a message of condolence.    Arrangements are by the Pattison Funeral Home and Crematorium 540 South Railway St. SE,  Medicine Hat T1A 2V6.  Please call 1-866-526-2214 for further information.