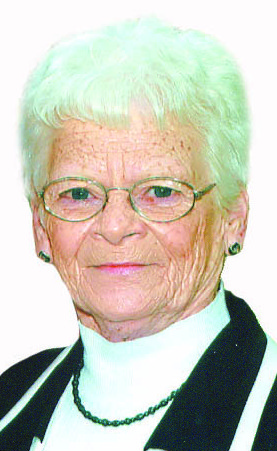 WIDMER – June Widmer was born June 21, 1936, in Assiniboia, Sask., the third child of seven children born to Art and Mary Girvin. She passed away in Maple Creek on January 16, 2016 at the age of 79 years.
When June was quite young, the family moved to Ravenscrag, Sask. where June attended a country elementary school. She moved to Eastend, Sask. to complete high school where she boarded with Bill and Ann Saville. After finishing grade 11, June moved to B.C. then returned to Maple Creek a short time later as she found it hard to be so far from home. Upon her return, she began training as a nurse’s aid for the Maple Creek Union Hospital and continued working there until her retirement over 40 years later.
June met her husband, Otto Widmer, in Maple Creek and they were married on September 27, 1956. They later welcomed three daughters Jaqueline, Carolyn and Shelly. June and Otto worked hard for the next several years and in 1969 achieved their dream of purchasing an older house on a 14 acre parcel of land just north of Maple Creek. They retired to Maple Creek in 1995.
To June, family was everything. She was very fortunate to have seven grandchildren and six great grandchildren who meant the world to her. June was their biggest fan and supporter in all that they did, travelling numerous miles to attend sporting events, cattle shows and dance recitals.
June was an extremely loving and caring person – always willing to help someone out and never asked for anything in return.
She is survived by her loving husband of 59 years, Otto Widmer; her children Jacqueline (Mick) Popick, Carolyn (Kim) Kuntz and Shelly Wagner (Greg Buekert); grandchildren Cory (Christy) Popick, Chris (Amy) Popick, Karen Wagner, Trent (Brittany) Wagner, Kelsi Kuntz, Kale Kuntz and Kendra Kuntz and six great grandchildren Haven, Macy, Samuel, Linden, Ashlyn and Chloe. June is also survived by her siblings Herb (Naomi) Girvin, Barb Gallot, Bernice Totten, Ethel Bourdages and Don Girvin.
June is predeceased by her parents Art and Mary Girvin and brother Wilbur Girvin.
June was a great mother, grandmother and friend to many people and will be missed dearly by all those who knew her.
If friends so desire, donations in memory of June can be made to the Heart and Stroke Foundation.