Ever hear of dandelion salad?

Families have their own recipes. Some of these recipes are an important part of religious or cultural celebrations. Others reflect what’s in season. In this column, I’ll share an April family recipe. If you haven’t already tried it, I’d like to introduce you to dandelion salad.
To start, I know mine isn’t the only family to eat dandelion leaves, but there have been several instances in my life when I mentioned it to people and assumed they knew what I meant. Rather than nods of comprehension, I met with enquiring glances and awkward silence.
The love of food is something we all share in my family. For us, dandelions are a special treat that are only available at a certain time of the year. This salad is a way we celebrate spring because dandelions are one of the first edible plants to grow after the long Prairie winter.
Dandelions are versatile. Aside from salad, you can also use the roots to make a form of coffee. While I haven’t tried this coffee, I have sampled dandelion wine. It was excessively sweet. To be fair, the bottle had lingered in the liquor cabinet for years so it might have been tainted by age.
The word dandelion is French in origin. Dent de lion means tooth of the lion and I’m told this has to do with the shape of the leaves. It’s interesting to note that although dandelion is a French word, French-speaking people call this early-flowering spring plant by a totally different name. They say pissenlit, which literally means piss the bed. Honestly, I’m not making this up. And I can assure you that this has never happened to me after eating dandelion salad – EVER. If there’s anyone it should happen to it would be me because I can eat a lot. In traditional medicine, dandelions are used as a diuretic hence the name in French.
Medicinally speaking, there are other benefits. Apart from being a great source of iron, dandelions are also rich in many vitamins including A, C and K. They also contain important nutritional elements such as fibre and calcium. While they might not seem like an obvious source of food, they’re one of those things that seem strange until you try them.
There are two simple things to keep in mind if you plan on preparing dandelion salad. The first is to only use the leaves of plants that haven’t flowered. Once the flower has appeared, the leaves develop a very bitter taste that will sour you to the experience. The second rule is the most important. You must be completely sure that the plants have never been sprayed with chemicals. If they have been, it could be very hazardous to your health to consume them.
If you aren’t positive that you can pick pesticide-free plants or on the off chance that dandelions don’t grow in your area, keep in mind that you might be able to find them win some grocery stores. I’ve seen them at various Sobeys and Safeways, but I don’t know if all locations carry this product. Your local farmers market might carry them.
My grandmother, my aunts and my mom all have their own ways of preparing dandelion salad, but the common trait is that they mix the dandelion leaves in with a regular salad. If a person were to prepare a salad made exclusively with dandelions, I suspect they would find the taste somewhat bitter. Dandelions are used to compliment salad.
Once you’ve picked the dandelions, cut off the roots and then wash the leaves. After you’ve added them to the rest of your regular salad, it’s time to choose your dressing. My grandmother makes her own with mayonnaise and onions and a few other secret ingredients. My mom has a recipe based on strawberry balsamic vinegar. Both are excellent, but I’m sure there are many types of store-bought dressing you could use with equally good results.
And now for the million dollar question. What does dandelion salad taste like? I was always told that tastes aren’t to be discussed. The answer is up to you. Try it. 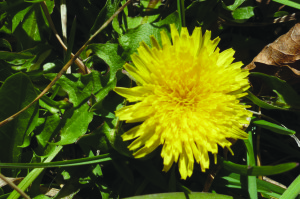 Perhaps not commonly thought of as a food, dandelion leaves are a delectable addition to a regular salad. The trick is to pick them before they flower otherwise the taste isn’t as good.       Photos by Dominique Liboiron 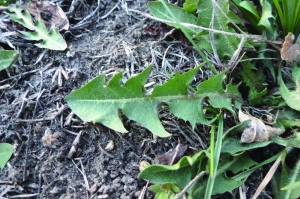 A dandelion’s leaves contain vitamins and many nutrients. The plant’s name comes from the jagged shape of the leaves which is said to look like a lion’s tooth. Before preparing dandelion salad, you must be sure the plant hasn’t been sprayed with chemicals.