The booklet in my hand tells fire departments how to respond after a nuclear bomb. Printed at a time when the threat of nuclear war seemed possible, even imminent, it’s just one of the interesting historical documents the Maple Creek Fire Department has in its records.
I came across the booklet when gathering information about the department’s 1942 Ford fire truck. Another item of note I found is written by hand and it shares the history of firefighting in Maple Creek from the late 1800s until the late 1960s. This document was written by former fire chief Jack White.
The handwritten history is penned in smooth cursive letters onto paper yellowed with age. While unfolding the neatly creased paper, it strikes me how rarely nowadays I read handwritten documents. This form of communication is a part of Maple Creek’s history not only for the information it shares about the Fire Department, but also because it shows how residents exchanged information before email or printers.
Along with the pages Chief White wrote, the records also contain two pages of historical information written with a typewriter. One of the pages has the letterhead of the Maple Creek Fire Brigade while another bears the crest of the 1965 Saskatchewan Diamond Jubilee. The typewritten pages paraphrase the handwritten document, but in the form of a speech White gave to the Rotary Club.
Both documents explain that in the early 1890s Maple Creek was still just a village, but it was growing and therefore the ability to fight fires became necessary. At first, firefighting was a community effort. “When a fire was discovered the person would in a loud voice call fire, the call would be relayed by anyone hearing and soon the whole village was alerted, and each person grabbed his water pail and headed to the town well, and the fire was fought by bucket brigade.”
The Maple Creek Fire Department was created in 1904 with Jules Quesnelle as the first fire chief. A fire hall was built and two hand-drawn 40 gal. chemical extinguishers were purchased, the documents state. The fire bell and a horse-drawn hook and ladder wagon came a year or two later. To encourage quick response times, the first man to harness his team of horses to the hook and ladder wagon was paid a fee. Here, the handwritten and typewritten notes disagree. The fee was either $5 or $3, with the second and third man to arrive with his team at the fire hall getting a lesser fee. Both sources agree this arrangement lead to false alarms, “especially on a quiet afternoon when there was need for a little excitement. A good race provided it.”
By 1908, the town had a water system with the water being piped in from the hills eight miles away. The water system allowed hydrants to be installed and the fire department acquired 1,000 feet of hose. “The hose was mounted on a two-wheeled cart and pulled by hand to a fire. For several years the static pressure at the hydrants was as high as 120 lbs. In later years the pressure dropped to about 30 lbs due to leaks and growth of the town.”
By 1920, the fire department had acquired a pumper truck. It was a Chevrolet capable of pumping 420 gallons per minute. In 1941, the department acquired a 1942 model year Ford two-ton, which was, “the last fire truck built before the company went into war production,” the typewritten letter explains.
The 1942 Ford was converted into a fire truck by Bickle-Seagrave of Woodstock, Ont. This vehicle is still in running condition, but no longer sees active duty. It is currently undergoing minor restoration work and will be on display at the Glascock Bldg. once the project is complete.
The fire department acquired another Ford truck in 1968. It was delivered in May of that year at a cost of over $21,000.
According to the documents, one of the more memorable fires in Maple Creek’s history occurred in 1939 when the old Ford garage burned. “It was a spectacular fire with oil barrels exploding and shooting up in the air like fireworks. There were no injuries as it happened at noon hour.”
Unfortunately, there were fires that caused injuries and even fatalities; the worst occurring Dec. 11, 1946 when a fire in a dumb waiter shaft at the hospital “quickly spread to the whole building.” Seven people died of suffocation.
The typewritten document concludes by saying, “the greatest cause of fire still remains to be caused by smokers’ carelessness.” 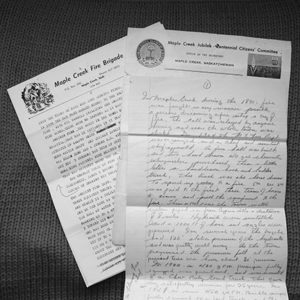 NEWS PHOTO DOMINIQUE LIBOIRON
Former Maple Creek Fire Department chief Jack White wrote a history of firefighting in the community from the late 1800s until the late 1960s. His documents have been preserved by the Fire Department and are held in their records.