Saying ‘thank you’ to Zack

For 13 years, Zack Smith made Maple Creek proud as a fierce competitor in the National Hockey League.
He showed his battling qualities during 11 seasons with the Ottawa Senators, before moving to Chicago Blackhawks.   Known as a tough, but fair, player, he was never afraid to put his body on the line, sometimes with painful results.
Now that the 34-year-old forward has retired from the NHL – a decision announced in September, 2021 – it is Maple Creek’s turn to show its appreciation for one of its most revered sporting sons.
On Saturday June 18, there will be an 18-hole Zack Smith Retirement Golf Tournament, featuring 112 players split into foursomes. Smith – and hopefully some of his NHL friends – will take part.
The morning will see 56 players at Maple Creek Golf Course, the others at Cypress Hills Golf Course. Golfers will then get on a bus and switch courses for the afternoon.
A supper will be held in the evening above the Maple Creek Curling Club. It will be a chance for people to shake Smith’s hand and show appreciation. In addition, there will probably be an auction of his player jerseys.
Although the event is primarily a celebration of Smith’s career, it will also be a fundraiser, with the swimming pool campaign the likely beneficiary.
Registration for the tournament started yesterday (Monday, May 9) and costs $150 per person. Anyone interested in participating should contact the Pro Shop.
The idea for the tournament is the brainchild of Don Lewis and Dave Eng.
The pair were founders of the Zack Smith Annual Charity Golf Tournament that was a fixture in Maple Creek for ten years; the final one was held in July, 2019, raising an estimated $96,000. Since its inception the event probably raised well over $3450,000 for causes in the Southwest community.
Lewis said planning for the retirement tournament was well under way.
“This is the least we could do for Zack after his illustrious career,” said Lewis. “We hope many of his NHL buddies will show up. It will be a nice event for the town.”
Lewis said he planned to take part in the tournament in a foursome including his wife, Jeanne. The other pairing has not been decided, but might be Bruce and Shirley Sharp.
“We are looking forward to it. We really want to have a party to acknowledge Zack and recognize what an outstanding career he has had. He came from a small town, and we want to tell him, ‘Thank you, Zack”.
Lewis said Zack had been a great ambassador for Maple Creek.
“He always spoke highly about Maple Creek whenever he was interviewed.”
Lewis said he could understand why Smith was hanging up his skates.
The average career length of a professional hockey player is about five years, he pointed out. It was remarkable that Smith, who played such a physical way, should compete for 13 years.
“He has injured his back and hip,” he said. “His body is telling him it’s time to retire.”
Lewis said he already missed Lewis competing on the ice.
“Watching hockey is not the same without him,” he said.
Smith first made his mark in the Swift Current hockey scene. In 2002-03 he suited up for the Broncos U15 AA squad, before joining the U18 Legionnaires in the following season. He then spent four years with the Swift Current Broncos in the Western Hockey League, including one as captain. His production peaked in his final season there, when he had 22 goals and 69 points.
He would go on to be selected in the third round (No. 79) of the 2008 NHL Draft by the Ottawa Senators, the team with which he will forever be associated. After being the last player cut in his first training camp in Ottawa, he spent most of the next two seasons with Binghamton of the American Hockey League.
Smith made his NHL debut on November 29, 2008 against the New York Islanders – his only league appearance that season. In 2009-10, he played 15 games with the Senators, getting his first NHL point on January 16, 2010 with a shorthanded goal against the Montreal Canadiens.
In 2011-12, Smith appeared in 81 games, finishing seventh on the Senators with 14 goals and fifth in shooting percentage (10.4 per cent).
During the 2012-13 NHL Lockout, Smith was signed on November 26 as a free agent by Frederickshavn White Hawks in Denmark. In seven games, he scored four goals and provided six assists, before returning to the Senators.
Smith was restricted to 37 games in 2014-15 because of a wrist injury following a collision with Boston Bruins forward Brad Marchand. He used the recovery time to improve his skating.
His time with the Ottawa Senators saw him play 612 games in 11 seasons, scoring 193 points – 94 goals, 99 assists. Ahead of the 2019-2020 campaign he was traded to the Chicago Blackhawks on July 16, 2019 for Artem Anisimov.
He spent two seasons with the Chicago Blackhawks, but found himself sidelined by a back injury and then the COVID-19 pandemic that shut down the league.
After nearly two years away from the rink, Smith decided to bring the curtain down on his career.
He recently bought an acreage in Spruce Meadows, near Calgary, where he and his wife, Brittany Brodziak, are raising their two children. He also has a property in Beaver Flats. 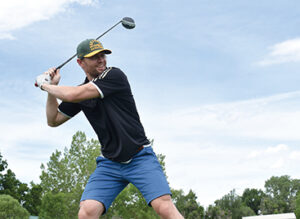 In the swing of things: Zack Smith is pictured in the 2019 edition of the Zack Smith annual Charity Golf Tournament.